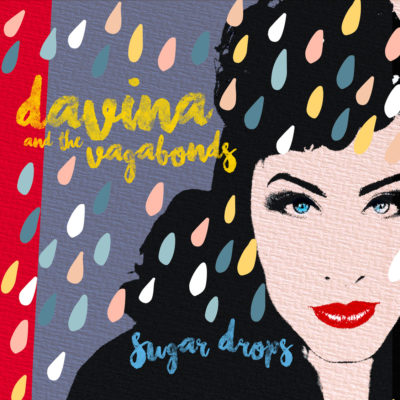 “This music, as retro as it may be at times, feels fun, frisky and alive.” – American Songwriter

“Davina and the Vagabonds combat heartache with sugar and sass.” – No Depression

“Davina Sowers is a one-of-a-kind performer whose singing… has a sassiness bearing some comparison to that of heart-thumping blues queens Ma Rainey and Ida Cox.” – Downbeat

Leading up to the release of SUGAR DROPS, Davina has received praise from Rolling Stone which featured her second single, “I Can’t Believe I Let You Go,” on Rolling Stone‘s “10 Best Country and Americana Songs to Hear Now.” Not only that, her third single, “Devil Horns,” premiered exclusively on Relix.

SUGAR DROPS is distillation of bluesy barroom baritone and bravado, graveyard jazz grooves, and noir-ish confessional lyricism backed by boisterous piano, guitar, and strings. Eclectic, engaging and instilled with a deep respect and knowledge for the Great American Songbook, SUGAR DROPS is the actualization of longstanding intent for Davina.

“It represents about 100 years of Americana; I did exactly what I wanted to do,” she says.

Davina grew up in Altoona, PA, which she now describes as “awesome in the industrial era, but horrible for high school.” She developed a heavy drug habit in high school, which morphed into heroin dependency, left her homeless, sent her in and out of jail, and brought on all manner of trouble. Kicking dope on the streets, she “got clean, started the band, and worked [her] ass off every day since.” Davina and the band are constantly on the road, touring throughout the world they’ve earned feverish acclaim from the Chicago Tribune, NPR, and more in addition to performing on BBC’s international favorite late-night program Later…with Jools Holland and appearing on PBS’s Bluegrass Underground.

May 13 — East Lansing, MI — Wharton Center for the Performing Arts

May 16 — Midland, MI — Midland Center for the Arts