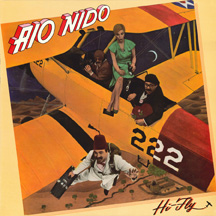 The popular vocal jazz trio Rio Nido emerged from the heady days of the Minneapolis West Bank music scene of the early 1970’s, playing at the legendary New Riverside Cafe and Extempore Coffeehouse. With Tom Lieberman on vocals and guitar, Prudence Johnson on vocals and Tim Sparks on vocals and guitar, Rio Nido specialized in Classic Jazz and Swing of the 1930’s and 40’s. In 1977 they recorded I Like to Riff which featured arrangements of The Boswell Sisters, The Cats and the Fiddle, Stuff Smith, Al Jolson and Nat King Cole.  Performed with a stellar lineup including Butch Thompson, Eddie Berger, Willie Murphy, Peter Ostroushko, Jim Price, Gary Raynor, Hearn Gadbois, and members of the Wolverines Classic Jazz Orchestra. Recorded by Dave Ray, Chris Hinding and Michael McKern, I Like to Riff was produced by Charlie Campbell and Doug Ackerman for Campbell’s Shadow Records label with artwork by famed music poster artist John Hanson.

Tom Lieberman left the group in the late 70’s and after a brief hiatus he was replaced by Roger Hernandez on vocals and drums. Beginning in 1980, Rio Nido switched to a quartet format of guitar, bass, drums and vocals and focused on the vocalese style of Lambert, Hendricks and Ross and Eddie Jefferson as well as Do-Wop classics like 60 Minute Man, which showcased Hernandez’ rich baritone. Prudence Johnson blossomed in this period as arguably the best jazz singer ever to come out of Minnesota.