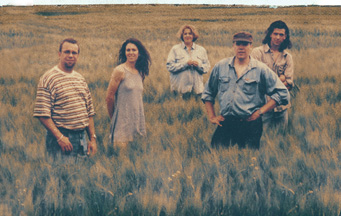 Growing up in a French-speaking family on the prairies of Saskatchewan, Hart-Rouge’s music reflects an upbringing as Francophones in a sea of English–moving effortlessly between languages and cultures, creating a unique blend of both sounds and subject matters. Individually, the Campagnes’ voices are exceptional: Paul’s rich, smooth, and expressive; Suzanne’s smoky, sensual, and emotional; and Michelle’s crisp, soaring, and spine-tingling. Their intricate vocal harmonies are those that only siblings can create. They blend their voices and anticipate one another as people do when they’ve spent their entire lives together. Rounding out the band are Davy Gallant and Michel Dupire, who bring their own extraordinary musicianship and technical expertise to the recordings and performances. The band members play over thirty instruments among them, including acoustic and electric guitar, bass, violin, accordion, flute, bagpipes, mandolin, percussion and even feet. Their roots-based arrangements and instrumentation are always complex and innovative, maintaining a standard of excellence throughout the recording.

Hart-Rouge’s three Red House albums Beaupre’s Home (1997), Nouvelle-France (1998), and Une Historie De Familie (1999) were met with critical acclaim for their pop infused roots music and artistic prowess. They flawlessly mix songs of family and relationships with tunes of farming and community on the Canadian prairie balancing between melancholy and bittersweet tones. Hart-Rouge’s intricate songwriting goes straight to the heart of any listener as they present extremely personal, individual views on broad, universal stories with an emotional depth and a musical sensibility that makes them such an intriguing group of musicians.