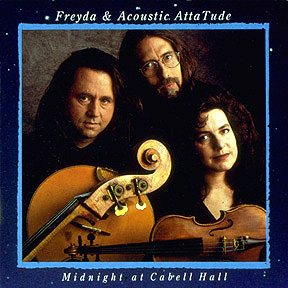 It was a meeting of musical minds the day Freyda Epstein, Ralph Gordon, and Bob Vasile launched the band Freyda & Acoustic AttaTude.  Not since the days when Freyda and Ralph were members of Trapezoid had a sound so sparked their imaginations.  That spark is igniting enthusiastic fans across the country with the band’s fresh approach to performing and recording acoustic music.

These three seasoned musicians join together to create beautifully crafted acoustic music.  Freyda’s soaring lead vocals were described by Washington Post writer Richard Harrington as having a “…gem-like quality akin to an earthy ruby.”  Her vocals and violin are matched with Ralph’s tasteful contrbass, and Bob’s intricate guitar and cittern accompaniment.  Bob also adds harmony vocals that contour and blend with Freyda’s lead.  Their music swings shamelessly between the gerenres of folk, jazz, blues and classical music and stretches the boundaries of acoustic music to emerge as a rare blend.  The material ranges from heartfelt renditions of original songs, to sparkling instrumental odysseys.  As Freyda describes it, “We’re just trying to let our thoughts and hopes and dreams for the future be honestly reflected by the songs we sing and the notes we play.”

Their performances The band made its debut in the summer of 1991 as Freyda and the Attaboys.  Their first appearances at the Winnipeg Folk Festival and American Public Radio’s Mountain Stage, received the kind of warm welcome normally accorded long-time veterans of folk music.  In fact, each member of the band has a venerable history in the acoustic music world that makes their collaboration well grounded in experience.

Their Red House release Midnight at Cabell Hall was recorded “live” at the Cabell Hall at the University of Virginia using the “Stereo Microphone technique.”  By recording the album in this fashion they were able to capture the sound of the room, creating a warmer, richer sound.

In 2003, Freyda was tragically killed in a head-on car collision.