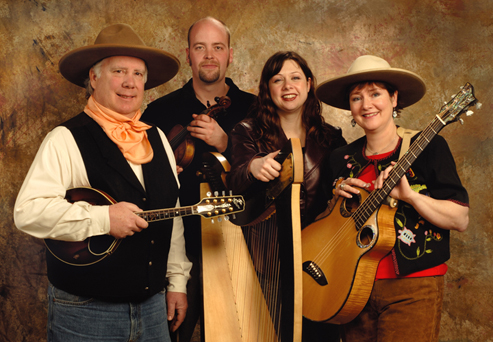 On the western plains of nineteenth century North America, intoxicating Gaelic melodies drifted through the evening air at many a cowboy campfire and during lonely shifts at night guard. These songs were brought over from the old country and often refitted with lyrics that reflect the men and women who made their way west.

David Wilkie and Cowboy Celtic bring to life this dazzling melding of Western traditionals and the Celtic styles of Scotland, Ireland, and Wales.  Cowboy music has well documented origins in the Celtic tradition using many of the melodies as foundations for songs as they wandered the plains.  Cowboy Celtic creates music that is both hauntingly beautiful and delightfully jovial with captivating melodies that keep your foot stomping.

Red House released two of Cowboy Celtic’s albums, Cowboy Celtic (1996) and Cowboy Ceilidh (1998), garnering praise from around the country. Wilkie received the Wrangler Award from the National Cowboy Hall of Fame in Oklahoma and his Cowboy Ceilidh was voted Outstanding Traditional Western Music Album in 1999.

David Wilkie and Cowboy Celtic continue to tour the western United States, Canada, and Scotland on occasion playing their unique blend of two traditions that have played such a vital role in shaping the country.