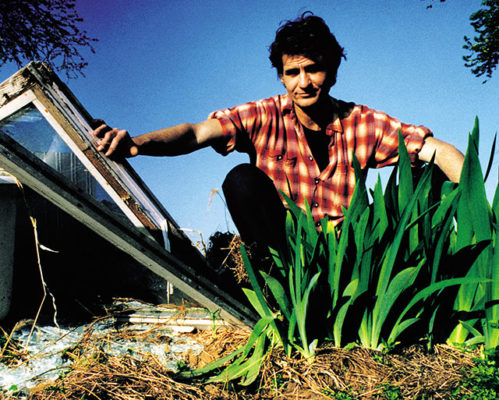 Dave Moore is one of the great songwriters to come out of the state of Iowa.  Known for his elegant songwriting and instrumental prowess on blues guitar, button accordion and harmonica he has become somewhat of a legend.  Coming of age in the late ’60s and early ’70s, Dave enrolled in college only to drop out to follow a girlfriend down to Guadalajara, Mexico.  Though the journey lasted only a few months, it was to be the first of many travels in Latin America and totally altered his world view.  Returning to the States for the holidays in 1971, his mother serendipitously left a harmonica in his Christmas stocking and he soon found that he could not quit playing it.  He spent the next few years traveling the Southwest and Northwest, working an assortment of jobs (lumberyard worker, fruit picker, plumber’s assistant) – all the time getting deeper into music.

After his western travels and another lengthy sojourn in Latin America (Colombia, Ecuador, Peru) he found that the college town of Iowa City had turned into quite the music scene.  Folk,  blues, and rock were spilling into the streets as music hangout began to pop up all over the city.

Around this time, he began to experiment with guitar and decided that he wanted to learn the instrument.  Inconspicuously, he headed back to Mexico-this time to a town that has since become a home-away-from-home, San Cristobal de las Casas.  With only a little plywood-topped Harmony 6-string, he holed up with a box of blues tapes and took occasional lessons from a Chiapas guitarist with a passion for American ragtime.

In 1980 Dave returned to Iowa City and teamed up with local songwriter Greg Brown who was just beginning to develop a national reputation.  For the next few years Dave backed up Brown on recording projects, extensive tours and several appearances on Garrison Keillor’s popular A Prairie Home Companion on NPR.

It was at this time Dave stumbled onto his other great musical passion, the accordian.  Awestruck by an accordion album featuring Fred Zimmerle’s Trio San Antonio, he traveled to Texas where he sought out the great masters of Conjunto music: Zimmerle, Johnny Degallado, and Santiago Jimenez, Sr. (the legendary father of Flaco and Santiago, Jr.).  All three men would give him lessons and encouragement on the 3-row button box.

In 1984 at a little folk festival, Dave won a contest whose prize was free recording time in a studio.  He took the oppurtunity to record Jukejoints and Cantinas, an album that brilliantly pulled together all of the American roots influences that had been stewing in him for years.  He passed its 14 sizzling blues and Conjunto tracks on to Bob Feldman of Red House Records, who enthusiastically offered to put it out.

The release of Jukejoints… led to a National Endowment for the Arts grant that underwrote three intensive months in Tejas studying with accordion master Fred Zimmerle.  Occasionally sitting in with Fred’s band in the dance halls, Dave found himself completely immersed in a major American regional music tradition.   Fred quickly became one of Dave’s closest friends and until his death, the closest thing he had to a mentor.

In 1986 Garrison Keillor invited Dave to perform on A Prairie Home Companion and after frequent appearances, he became the show’s band leader on tours to Alaska and Hawaii.  A year or two earlier he had quietly started writing his own song and in 1990 he released Over My Shoulder, an 11-song collection that has become a cult classic.

Moore was in preproduction of his third disc in 1994 when his wife lost a daughter in infancy.  He stopped playing for a while, and when he did return, preferred to stay closer to home and family.  Five years went by, songs accumulated and, in time, a desire to return to recording and touring.  He had written an enormous number of chilling-to-the-bone songs based on his own experiences.

In mid 1998, he announced that he was ready to record again.  Seeking a co-producer for the project, he looked to Iowa City roots-rocker Bo Ramsey, who had produced several discs for Greg Brown and had just finished touring in Lucinda Williams’ band.  Dave had long admired Bo’s work and instinctively felt he was the best man to guide the recording session.

The result was Breaking Down to 3, an album that is considered his best ever.  Recorded with an all-Iowa band, the songs are as breathtaking as they are stunning with vivid imagery drawn from the depth of his life experiences painting a picture of the quintessential American journey.