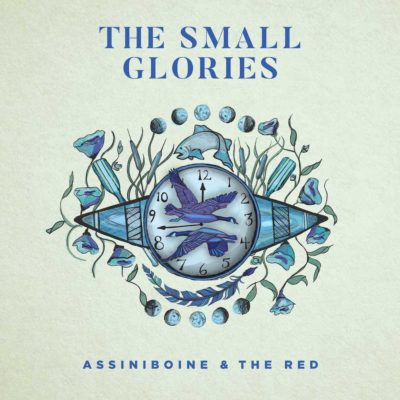 The Small Glories make their US debut with ASSINIBOINE & THE RED, an album that celebrates the Canadian Prairies. The first single, “Oh My Love,” is included in NPR‘s “New Music Friday” Spotify playlist. The album’s title references the junction of two rivers, the Assiniboine (pronounced ‘uh-sin-uh-boin’) and the Red, in the duo’s hometown of Winnipeg, Manitoba, and celebrates the happenstance meeting of members Cara Luft, an original member of the Wailin’ Jennys, and multi-instrumentalist JD Edwards.

LISTEN TO “OH MY LOVE” HERE

The album’s songs play out like travelogue of sorts. ASSINIBOINE & THE RED is rich with a sense of place and geography and is bookended by two songs that pay tribute to locales Luft and Edwards’ onstage chemistry and humor complements their energetic live performances and buoyant, Americana-inflected folk songs; their exuberant harmonies bring to mind such duos as the Civil Wars and Shovels & Rope, but with a Northern spin.

Recorded in Winnipeg, Manitoba during a bracingly cold Canadian spring, ASSINIBOINE & THE RED reuinited the duo with producer Neil Osborne, frontman and songwriter for the iconic Canadian rock band 54-40. “Although he’s not a ‘folk artist,’ he has the heart of a folk singer and firmly believes in the power of song and in serving the song,” says Luft of Osborne.

“Each of the songs on the album is a co-write, either between the two of us, ” Luft explains, “or between us and other writers, which we feel has helped created a very unique and powerful collection of songs.” Co-writers include some of Canada’s finest — Lynn Miles, James Keelaghan, Catherine MacLellan, Bruce Gurthro, Ashley Condon and Andrina Turenne — as well as American poet Glenn Bowie.
“Many of the songs were written around the theme of home — where we call home, where others call home — and the various stories and histories and landscape of these specific locations. We focused on Canadian places; we are Canadian after all!”
Already known in their native Canada as well as for their performances at international festivals including SXSW and AmericanaFest, the duo has captured the charm and chemistry of their live shows with ASSINIBOINE & THE RED’s collection of engaging, memorable songs.

LISTEN TO THE ALBUM HERE