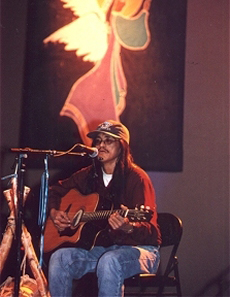 The son of a shaman, Alfred was designated a “Keeper of Songs” at birth. Although he spent his first five years living a traditional Aboriginal life and speaking his native language, he gained an understanding of the modern world while attending residential schools in the southern Yukon. Blessed with a strong singing voice, he sang throughout the Yukon with a school choir. Acquiring his first guitar as a present from his parents, at the age of seven, Alfred became enchanted by the music of Bob Dylan. As a teenager, he began combining modern guitar techniques with traditional Aboriginal music.

For much of Alfred’s early life, however, music remained a side interest. During the late 1970s and 1980s, much of his attention was devoted to working on land claim negotiations between the Selkirk people and the governments of Canada and the Yukon. During the summer of 1995, his work paid off when an agreement was finally signed. Alfred increased his involved with music shortly after his father, prior to his death, requested that he keep the songs of his ancestors alive. Alfred’s debut album, Etsi Shon (“Grandfather’s Song”), initially released in 1994, was re-issued in 1996. His second album, Nendaa: Go Back, was released the following year, trailed in 1999 by Kehlonn.